A team of lawyers, staff and estate agents from Hartley & Worstenholme beat off competition from rival teams in a charity ‘It’s A Knockout’ tournament on Sunday 14th July in aid of the Prince of Wales Hospice – raising over £600 in the process.

The day began with warm-up exercises (including some questionable dancing from Practice Manager, Paul Haslam) and six grueling challenges consisting of jumping over obstacles, crawling through holes, dressing up as firemen, and even throwing water over your teammates. 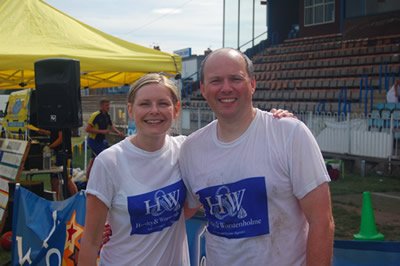 At the end of the first six challenges, Team Hartley & Worstenholme were in third place and facing a team of rugby players, amongst others, in the final. With sideline support from a Senior Partner, Meg Andrews, the team pulled together and clinched a win in record time. The team received a trophy cup for their win, gold medals, and even a day’s paintballing!

A special thank you goes to Michael Spencer, a Newcastle University student who was with the firm for a vacation placement and demonstrated extraordinary willing when someone had to be nominated to dress as a penguin.

“It was a true privilege to work with such a hard working team. The sportsmanship and determination shown by each member was incredible. Against some tough competition, I am delighted we won. The Prince of Wales Hospice is a fantastic charity and I am proud we have raised so much money whilst having such fun!”

The Prince of Wales Hospice charity provides a vital service to the local community, and is dependent on income from its shops, donations, and events like this. Hartley & Worstenholme has been a loyal supporter of the Hospice for many years, often participating in fundraising events, and even running will writing schemes that benefit the charity.

Victoria Maude, a Partner at the firm took part in the ‘It’s A Knockout’ event and had this to say:

“The Prince of Wales Hospice is a fantastic charity that provides an invaluable service to the local community. As a firm, we are regularly involved with assisting the Hospice in its fundraising efforts and today was another opportunity for us to do this. Every member of our team was exhausted by the end of the day, but it was definitely worth it.

We believe that local businesses have a responsibility to give something back to the community wherever possible and Hartley & Worstenholme staff are frequently involved in a whole manner of fundraising events. Recent schemes have included preparing wills for the Will Aid charity and Martin House Children’s Hospice in Leeds.”

Keep checking the ‘News’ section of our website for updates on recent charitable events and schemes.

For further information on the Prince of Wales Hospice, please visit their website at www.pwh.org.uk.